For some disabled service members and veterans, the only constant in the chaos of their lives is their trained service animal. These days, it's far too easy for anyone to put a vest on their dog and claim it as a service animal.

Cris Skinner, a Marine Corps veteran, is out to show just how important service animals are in the lives of those who need them -- not just veterans, but anyone who relies on such a companion.

Her idea is to use her talents to show people the power and meaning behind real service animals through two photographic storytelling projects, "The Constant in the Chaos" and "Your Calm in the Storm." 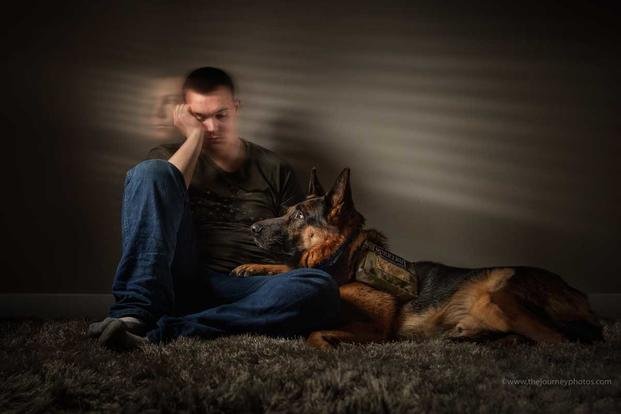 From the photo series "I Am Your Constant in the Chaos." (Cris Skinner)

Skinner is a photographer and former business owner based in Wasilla, Alaska. She first received a service dog after falling ill eight years ago and having to tend to her own needs. Because of her illness, she had to give up her lucrative business. Her dog is unrelated to her military service, but that chocolate Labrador is one of the most vital parts of her life.

"I wanted to bring light to the power of these animals," Skinner said. "Service dogs give people back their quality of life, even bringing people back from the edge of suicide. There are people who don't understand that not all disabilities are visible."

Read the rest of the article by visiting: https://www.military.com/veteran-jobs/marine-veteran-shows-importance-of-service-dogs-lives-of-disabled.html

Please note, comments must be approved before they are published